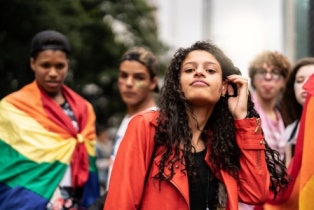 How youth see themselves in this technology-driven age is hugely influenced by the media particularly by the images, videos, posts, programming, and reporting consumed daily via smartphones, tablets, video games, and television.

Does that image reflect reality?

Maybe. Maybe not. Thanks to Snapchat filters, easy-to-use image editing apps, and countless other means that are readily available, many photos, graphics, and posts we see on social media, in movies, in the media, and in advertising are altered or not always a true representation of the person or the product.

What we see online and in the media can impact our self-image and so can what we hear in popular music. Lyrics and imagery conveyed through music greatly influence trends, fashion, behaviour, and perceptions of we see ourselves and others. Physical self-image, as well as a person’s views and perceptions of their gender, can be positively and negatively impacted by the information and imagery consumed.

Talking with your kids about positive body image

Promoting a positive body image begins at a early age. People come in all shapes and sizes, and all bodies are beautiful. Adults can be role models to children by being accepting of their body and having a positive attitude when it comes to food and exercise. Placing more emphasis on a child's abilities and skills rather than their appearance is another important step in promoting a positive body image from a young age. As well, encourage activities that make your child feel good about themselves and that don't focus on how they look. Bodies change with time, which you can help your child understand. They may see changes in their appearance and body in puberty and afterwards. Let them know that this is all normal. Empower kids to use critical thinking when consuming messages in the media, and have them question the imagery they see in movies, a magazine advertisement, or in a favourite television show.

Gender portrayal and stereotypes in the media

How gender is portrayed in the media and online can influence how youth see themselves. Perceived gender roles and stereotypes based on generalizations based on gender, age, race, etc., remain prevalent in the images, music, and information youth – and adults – consume on a daily basis.

Youth may not see their gender represented in what they see or hear, or it may be misrepresented. An individual’s gender is not necessarily man or woman. For some, the categories assigned at birth do not reflect the gender to which an individual identifies. There are different expectations, cultural norms, and stigmas for all genders – and they are not always correct. Some of these are prevalent from an early age, depicted in the storybooks we read to our young children and in the cartoons, movies, and other programming they watch.

It is important to talk with your children from an early age about gender and the concept of stereotyping in order to help them understand the gender stereotypes play in what they are reading and seeing. Empower them to question why the media assigns certain roles to boys and not to girls, which can make kids feel like they don't fit in or belong.  Media Smarts has developed a tip sheet for adults on talking with kids about gender stereotypes.

Helping a kid unpack the truth about how they view themselves is the first step to helping an individual feel comfortable in one's own skin. It is important for a person of any age to decipher fact from fiction, truth from reality, but especially critical to youth when molding one's identity and when looking after their digital well-being.